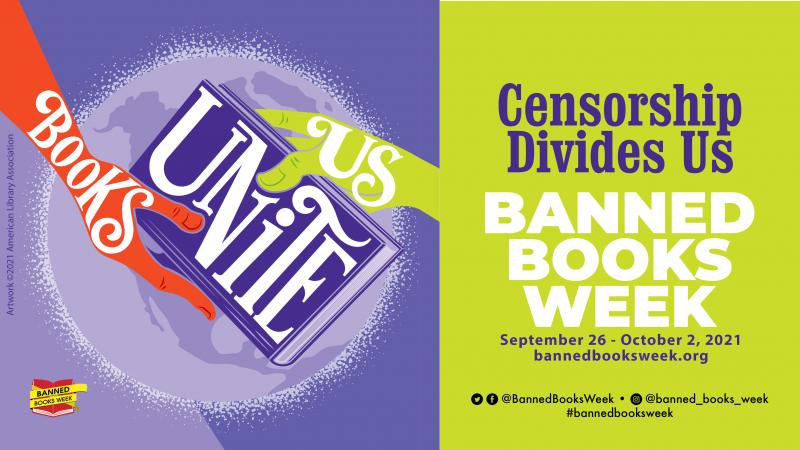 Banned Books Week is an annual event celebrating the freedom to read. It highlights the value of free and open access to information. Banned Books Week brings together the entire book community; librarians, booksellers, publishers, journalists, teachers, and readers of all types, in shared support of the freedom to seek and to express ideas, even those some consider unorthodox or unpopular.

CHECK OUT OUR DISPLAY OF "BANNED" BOOKS in the Store and on our Instagram account and below!

Stamped: Racism, Antiracism, and You: A Remix of the National Book Award-winning Stamped from the Beginning (Hardcover)

The Absolutely True Diary of a Part-Time Indian (Paperback)

Something Happened in Our Town: A Child's Story about Racial Injustice (Hardcover)

To Kill a Mockingbird (Paperback)

Of Mice and Men (Paperback)

The Hate U Give (Hardcover)

The Art of Racing in the Rain: A Novel (Paperback)

The Handmaid's Tale: A Novel (Paperback)

The Great Gatsby: The Only Authorized Edition (Paperback)

I Know Why the Caged Bird Sings (Mass Market)

The Call of the Wild (Hardcover)

The Perks of Being a Wallflower (Paperback)

Lord of the Flies (Paperback)

Hop on Pop (Bright & Early Board Books(TM)) (Board book)

The books featured during Banned Books Week have all been targeted for removal or restriction in libraries and schools.
By focusing on efforts across the country to remove or restrict access to books, Banned Books Week draws national attention to the harms of censorship.

WHY WERE THE TOP 10 BOOKS BANNED?!

1. George
by Alex Gino
Challenged, banned and restricted for LGBTQIA+ content, conflictin with a religous viewpoint, and not reflecting "the Values of the community"

2. Stamped: Racism, Antiracism, and You
by Ibram X. Kendi and Jason Reynolds
Banned and challenged becasue of author's public statments, and because of claims that the book contains "selective storytelling incidents" and does not encompass racism against all people.

3. All American Boys
by Jason Reynolds and Brendan Kiely
Banned and challenged for profanity, drug use, and alcoholism, and because it was thought to promote anti-police views, contain divisive topics, and be "too much of a sensitive matter right now"

4. Speak
by Laurie Halse Anderson
Banned, challenged, and restricted because it was thought to contain a policital viewpoint and it was claimed to be biased against male students, and for the novel's inclusion of rape and profanity.

5.  The Absolutely True Dialy of a Part-Time Indian
by Sherman Alexie
Banned and challenged for profanity, sexual references, and allegations of sexual misconduct by the author.

6. Something Happened in Our Town:  A Chld's Story About Racial Injustice
by Marianne Celano, Marietts Collins, and Ann Hazzard, illustrated by Jennifer Zivoin
Challenged for "divisive language" and becasue it was thought to promote anti-police views.

7. To Kill a Mockingbird
by Harper Lee
Banned and challenged for racial slurs and their negative effect on sutdents, featuring a "white savior" character, and it perception of the Black experience

8. Of Mice and Men
by John Steinbeck
Banned and challenged for racial slurs and racist sterotypes, and their negative effect on students

9. The Bluest Eyes
by Toni Morrison
Banned and challenged because it was considered sexually explicit and depticts

10. The Hate U Give
by Angie Thomas
Challenged for profanity, and it was thought to promote an anti-police message.