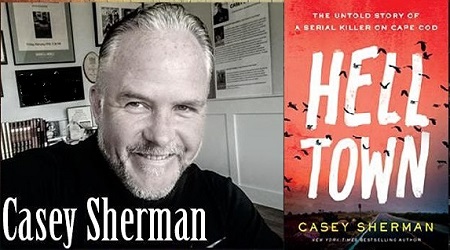 Casey Sherman, New York Times, USA Today, and Wall Street Journal Bestselling American author, journalist and screenwriter known for many works and in particular his 2009 book “The Finest Hours”, (adapted in the film of the same name) and “Boston Strong” (adapted into the film Patriots Day) and with Dave Wedge “Hunting Whitey: The Inside Story of the Capture and Killing of America’s Most Wanted Crime Boss," will be at Storybook Cove, Tuesday, July 26th at 4 p.m. signing his newest novel.

In this true crime narrative, Helltown: The Untold Story of a Serial Killer on Cape Cod, Casey Sherman tells the story of two legendary American authors and their obsession with the notorious Provincetown murderer, Tony Costa.  Kurt Vonnegut (“Cat’s Cradle,” “Slaughterhouse-Five”), who lived in West Barnstable during Costa’s trial and conviction, wrote about the case for Life magazine and corresponded with Costa in prison.  Norman Mailer (“The Executioner’s Song,” “The Naked and the Dead”), lived in Provincetown and wrote a fictionalized account of Costa’s murders in his 1984 novel “Tough Guys Don’t Dance.”

This is an in-person event.  Pre-order your copy today and come have it signed and personalized on the 26th!

Immersive, unflinching, and shocking, Helltown is a landmark true crime story that transports us back to the turbulent late 1960s, reveals the secrets of a notorious serial killer, and unspools the threads connecting Costa, Vonnegut, and Mailer in the seaside city that played host to horrors unlike any ever seen before. New York Times bestselling author Casey Sherman has crafted a stunner.

Helltown: The Untold Story of a Serial Killer on Cape Cod (Hardcover)