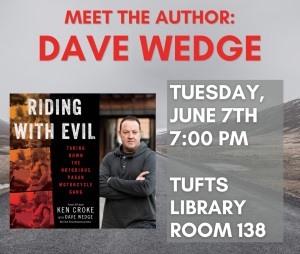 You must register to attend.  LINK to registration form and more information.

Storybook Cove will host a book sale and signing following the event.

Written with Ken Croke, a retired ATF agent who is the only cop to ever infiltrate the Pagans, Riding with Evil: Taking Down the Notorious Pagan Motorcycle Gang is the story of how Ken became a fully patched member of the drug-dealing, white supremacist biker gang and rose to sergeant-at-arms. He witnessed beatings, drug deals, brutal assaults, and plots to bomb their rival Hells Angels, all while trying to avoid having his cover blown, survive the violent biker underworld, and keep his sanity.

Dave Wedge is a New York Times bestselling author, podcaster and writer based in Boston. He has co-written five books with acclaimed author Casey Sherman, including “Boston Strong: A City's Triumph Over Tragedy,” a non-fiction drama about the 2013 Boston Marathon Bombings adapted for the 2017 movie “Patriots Day”; “12: The Inside Story of Tom Brady's Fight for Redemption"; “Hunting Whitey: The Inside Story of the Capture and Killing of America’s Most Wanted Crime Boss”; and “The Last Days of John Lennon,” written with James Patterson.