An octopus has squirted out black ink to scare off the small fish. Players join forces and use their skill to help the fish return to the clearer waters of the lagoon.

The players must pair up to catch fish. Since the fish are each fitted with two magnets, it is only in pairs and by coordinating their movements that the players will succeed in lifting the fish up and placing them in the lagoon before the sand timer runs out.

In pairs, the players catch a fish, lift it up and move it to the lagoon.  As soon as two players have carried a fish to the lagoon, the next team (or the same one in a two-player game) begins catching the next fish.

Beware: whenever players drop a fish because they bump into an octopus' tentacle or for any other reason, they must catch that same fish again from wherever it fell. 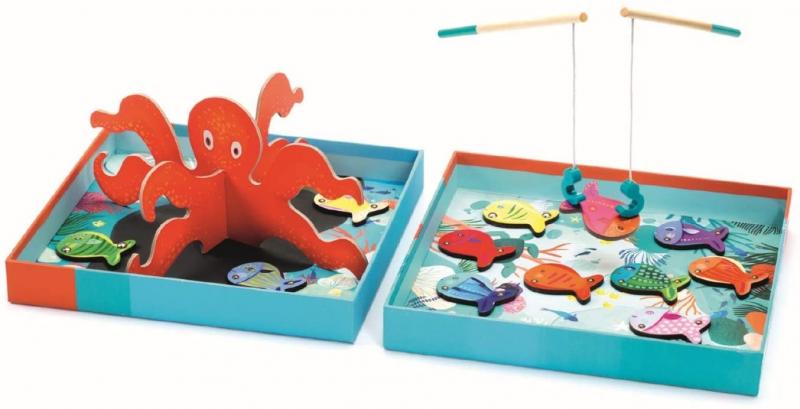 Contents:
2 trays - the bottom of the box with the ink stain and the lid with the lagoon with clear water, 1 giant octopus in 2 parts, 12 wooden fish, 2 magnetic fishing rods, 1 sand timer lasting 4 minutes.